Every soldier has a story. But too many go untold.

Their unique experiences and sacrifices – often heroic ones – are hidden away to gather dust. Eagles and Angels exists to bring these stories out into the open and pay tribute in a powerful and creative way. We salvage the old uniforms of our brave men and women, transforming them into high-end accessories to be proudly worn by those who support our troops.

Each piece is beautifully crafted in the US and carries the story of the soldier who wore it first.

Each purchase helps support the families of fallen heroes.

There are too many stories of courage tucked away in attics and old boxes across the country – secrets even to the families of the ones who served. They deserve to be heard. And to be preserved.

Eagles and Angels is proud to help them live on through the Cloth of Heroes™.

To learn more on how E&A was founded, read Tom’s story below.

Eagles and Angels Limited, Inc. (E&A) was started by retired, Army Special Operations combat veteran Tom, to honor the stories of US Veterans.

This is his story. This is our beginning…

As Tom and his daughter sorted through old boxes in the attic, whatever they had been searching for was forgotten when she found a dusty box containing an old camouflaged Army uniform. When she asked about it, memories washed over Tom. “It’s from a long time ago,” he responded.

As she kept searching, more uniforms were uncovered. Carefully, she laid each piece of her dad’s history on the attic floor.

“Tell me about these, Dad,” she asked as she brushed off a faded name-tag revealing her family name.

“That one is called chocolate chip,” Tom mused. “And that’s woodland.” Memories and moments echoed in his mind.

Tom’s thoughts drifted—he had never intended not to tell his daughter these stories, but there had never been a reason. Life had simply moved on and these stories, much like his uniforms, had been boxed and tucked away in his mind.

“You should do something with these,” his daughter suggested. “Something good. They deserve it.”

Tom realized she was right. These were stories his daughter wanted to hear. They were as much a part of who she was, as they were a part of Tom. And if his old uniforms had started a conversation with his daughter, could other uniforms start other conversations? Between mothers and sons, between veterans and friends, or between officers and civilians?

Telling these stories is why Eagles and Angels Limited was founded. Tom and his daughter’s hope is that the Cloth of Heroes™ line will give friends, families, and supporters a way to honor the sacrifice of these great warriors, while also giving donating soldiers a way to share their own stories with an appreciative and caring public. 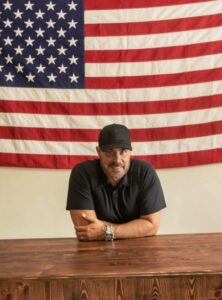