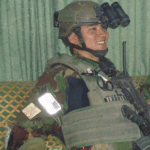 Mike Glover, a Retired Green Beret and the owner of  Field Craft Survival, spent 20 years with US Special Operations and as a gov. contractor with OGA. Mike served as a Sniper/Recce Team Sgt with the AFRICOM CRF and deployed to Libya after the Benghazi tragedy to conduct CT Operations. Mikes last assignment was as the Operations Sergeant Major for Special Operations Detachment-Africa. He now resides in Prescott, AZ where he owns and operates FieldCraft-dedicated to preparing citizens for the worst case scenario.

You can learn more about Mike on his Instagram page: HERE

1 review for The Glover